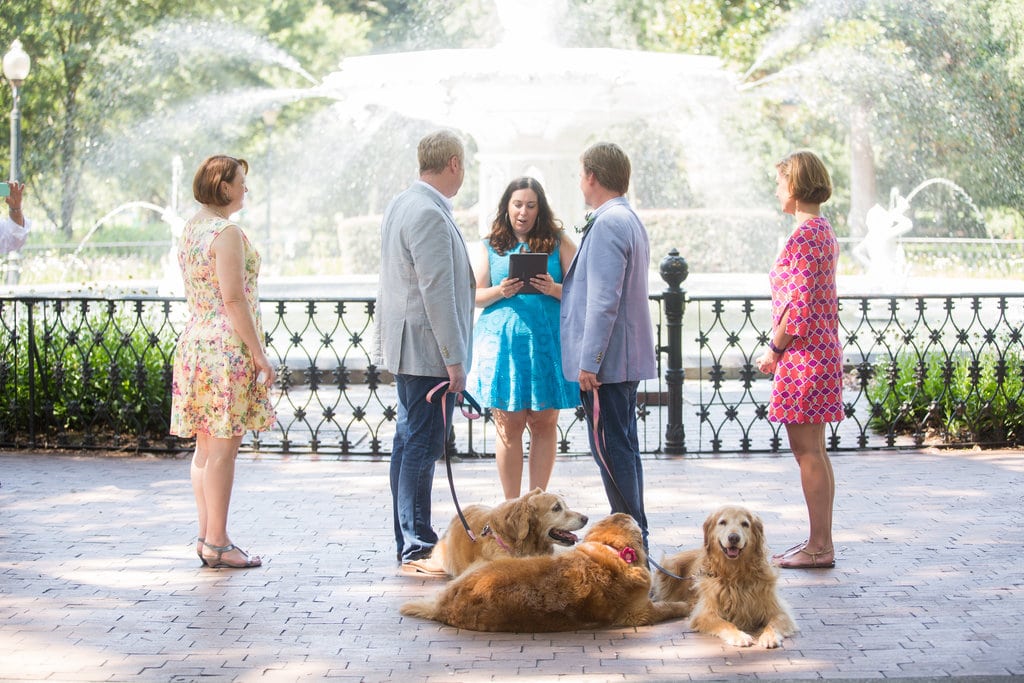 It’s July 4, 2015 and I’d like to honor the principles our country was built on by recapping the celebration we had here in Savannah, Georgia when same-sex marriage was recognized as a constitutional right.

For those of you who are unfamiliar with Savannah, we’re considered one of the top destination wedding cities in the country and the fountain in Forsyth Park is THE classic location to get married. Megan Jones, my favorite Savannah wedding photographer, and I planned for months to offer free weddings to couples for the two business days after the Supreme Court ruling that would finally make same-sex marriage legal in Georgia. As soon as we saw the ruling on Twitter on June 26th, we sprung into action to get to Forsyth Park so we could marry couples who didn’t want to wait. I barely made it out of the house in one piece as I got dressed, tweeted, cried with joy, answered phone calls, and spilled glittery eyeshadow all over myself all at the same time!

Our pictures went viral locally and on that Friday, we were swamped by press and vendor friends who volunteered flowers and cupcakes… but we didn’t have any couples come to the park. We did receive a visit from a lovely family who saw our picture on Facebook and decided that they wanted to bring us flowers for our celebration, as well as make sure their children participated in history. It was also their own 10th wedding anniversary. We cannot express how thankful we were for their support.

Despite the turnout, we were not discouraged. We had always planned two days of weddings because we expected that most people would need a full day to figure out how to get a marriage license. Over the weekend, WTOC, one of the local stations, posted a picture of myself, Megan, and our friends Sara and Lauren from Vivid Events with information about Monday’s event and then things became… interesting.

On the positive side, over 700 people liked the story, more than almost any other story WTOC had posted in months and it was shared over 130 times. However, there were HUNDREDS of comments from people who said I was going to hell, I should be ashamed of myself, and that they hoped ISIS would visit our celebration (that one still has my head scratching). My favorite was the person who called us a bunch of “butt humpers”… because, giggles.

I’ve also received email directly from people who wanted to let me know they did not approve. I’m a transplant, but I think the correct response to this email is “Bless your heart!”

When I decided to become a wedding officiant, I looked forward to marrying same-sex couples in Georgia as I believe that marriage is absolutely a civil right that should not be denied because of who you love. I’ve previously written about the benefits that come from a legal commitment. At the same time, I didn’t necessarily think of officiating weddings as an act of protest or revolution. However, I am fine with that role, too, if it meant I could show that Savannah was one of the best places on earth ANY couple should choose to honor their love.

Anyone who has worked with me for more than half of a second knows that I don’t equivocate when I feel strongly that something is right; opposition only makes me more resolute to do good work and surround myself with those who feel the same. Ambivalence and hesitation are not in my vocabulary. By Sunday night, the internet had me raring to go.

Fortunately, the only thing we experienced on Monday was love- SO MUCH LOVE. We arrived at the park to a line of couples ready to get married and supporters ready to cheer them on! Over the course of the day, we married 6 couples. In no special order, here are pictures of our couples from our celebration of love and equality. 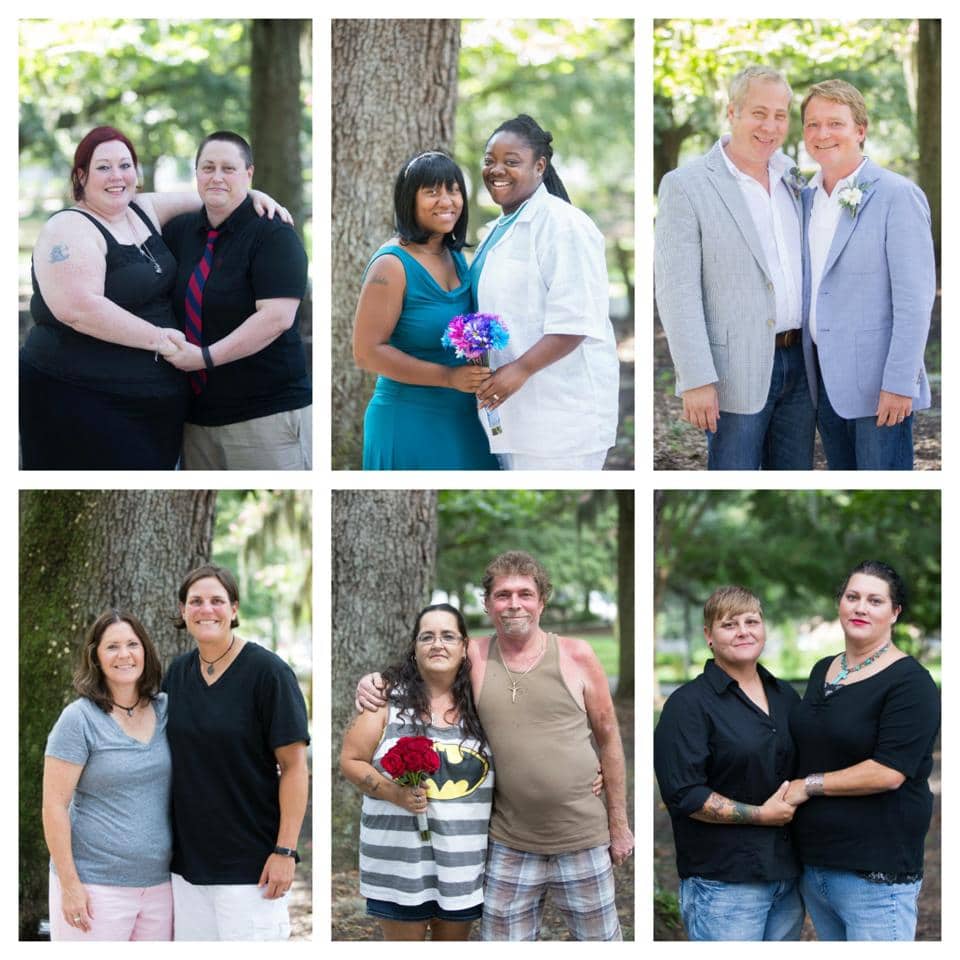 Jama’l and Sarah were our first couple in line. They told us that our celebration helped make one of their dreams come true. 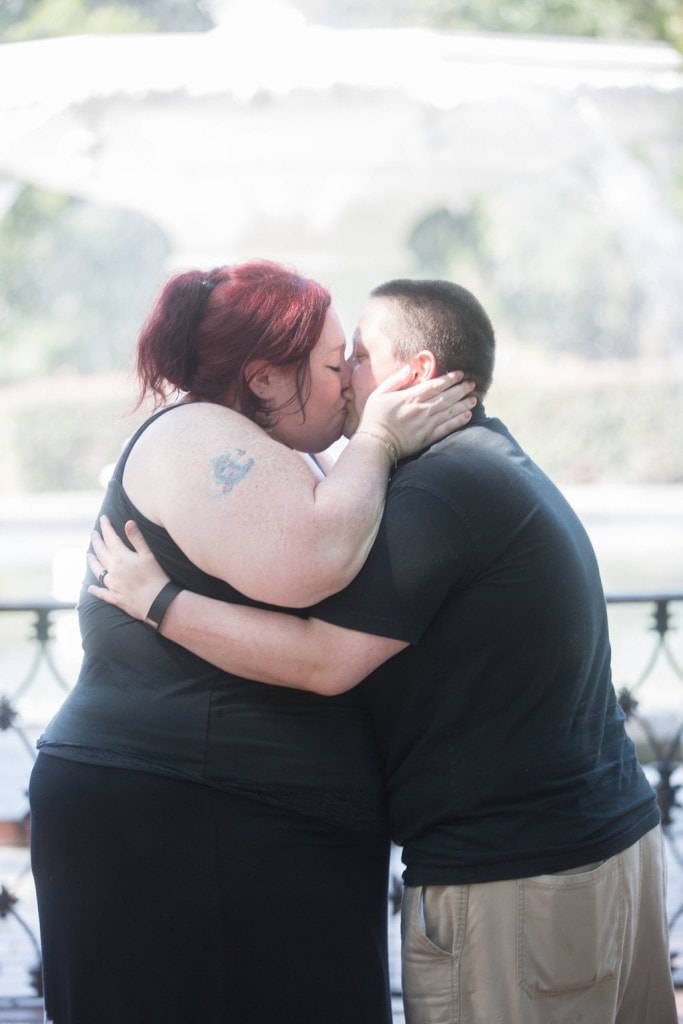 This next couple came from out-of-town to get their marriage license in Savannah. They heard about our celebration at the courthouse and spontaneously decided to get married as part of it. I am not quite sure if anyone stopped laughing throughout the whole ceremony! 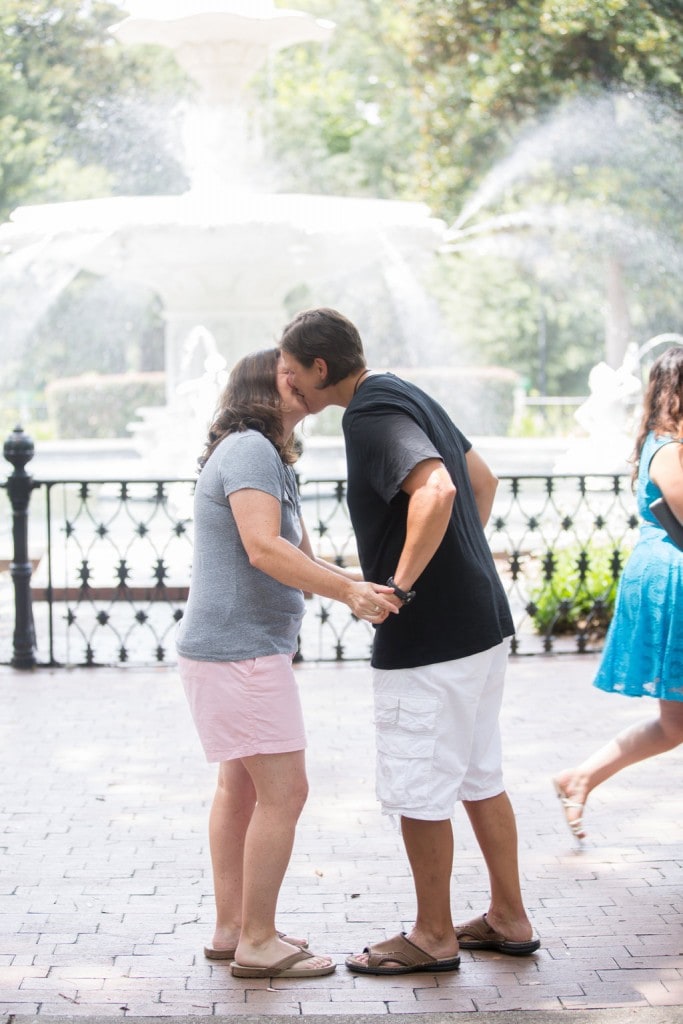 Thank you to Abby from Wicked Cupcakes of Savannah who provided delicious chocolate, vanilla and red velvet cupcakes for all of our couples!

Teresa and Gwen came all the way from Augusta, GA to be married in front of the Forsyth Park Fountain. We had a wonderful bouquet on hand from Vivid Events that matched Teresa’s dress perfectly. You could feel their love passionately from all ends of the park! 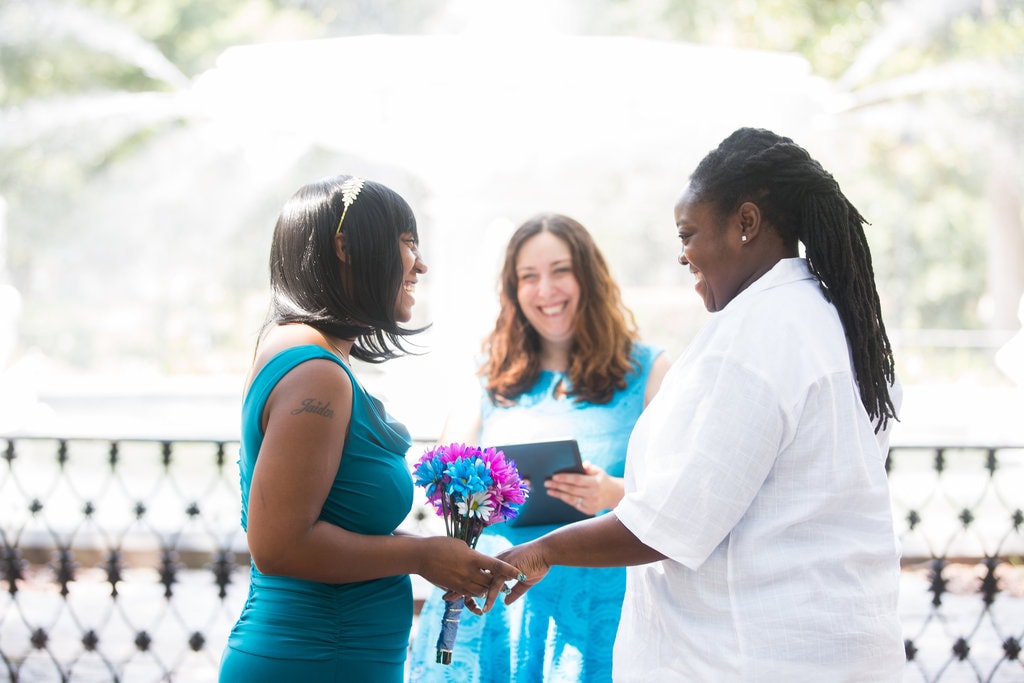 Here is an outtake that Megan sent me from this ceremony. I call it my “Drop the rainbow mic- I just married these ladies!” walk. 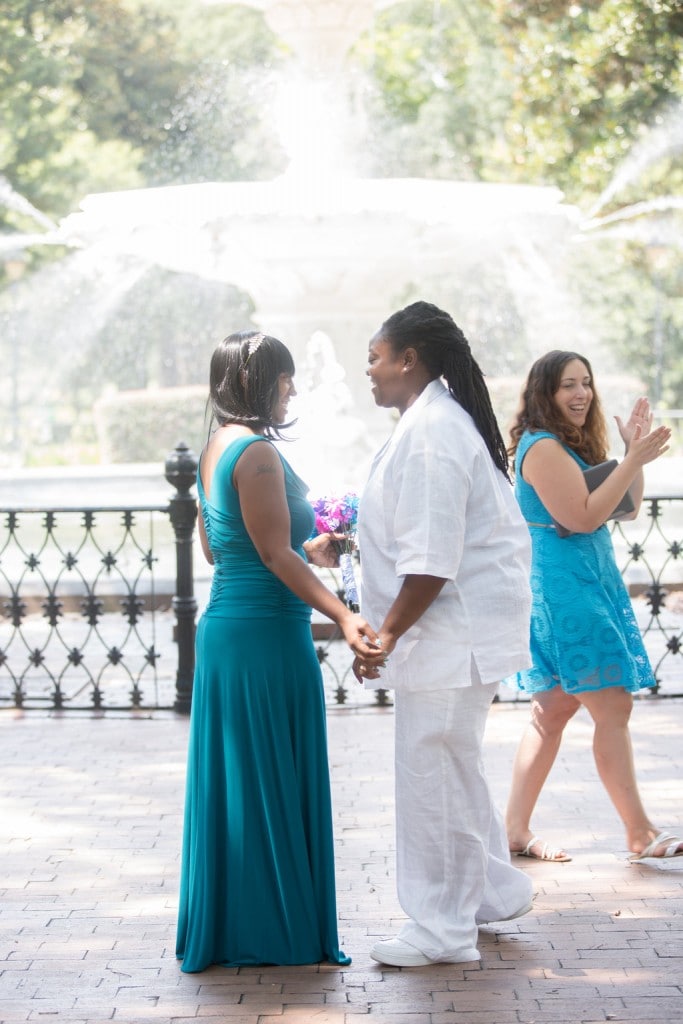 Our marriage equality celebration was open to all couples with a valid marriage license, regardless of sexual orientation and one straight couple took us up on our offer.

Jamie and Ashley from Hinesville, GA brought their nephew to their popup wedding. Their ceremony had lots of tears of joy. 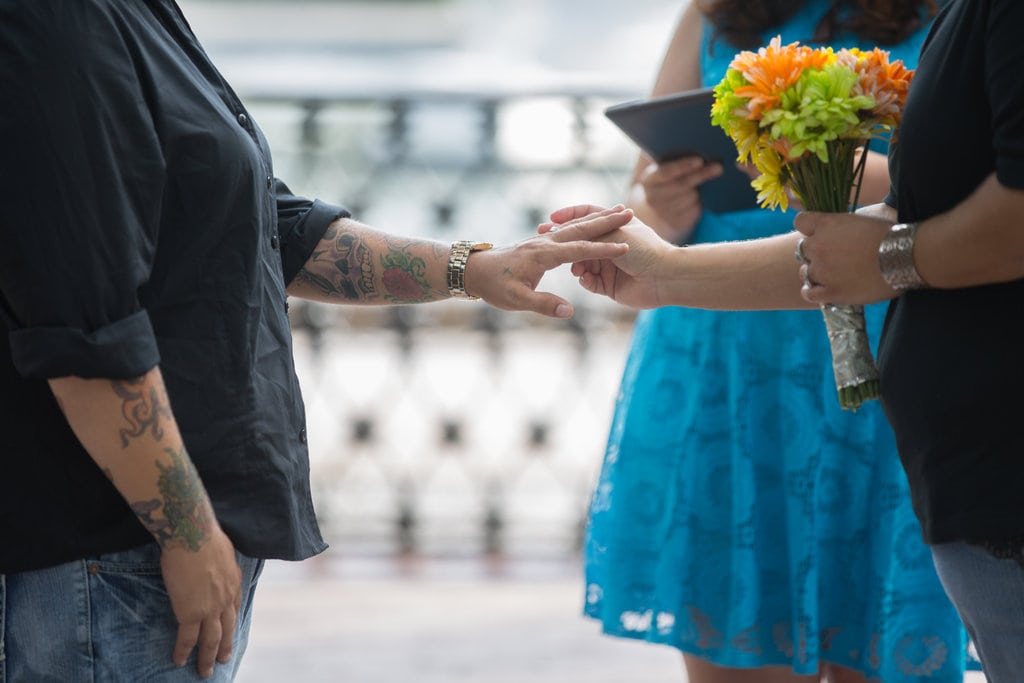 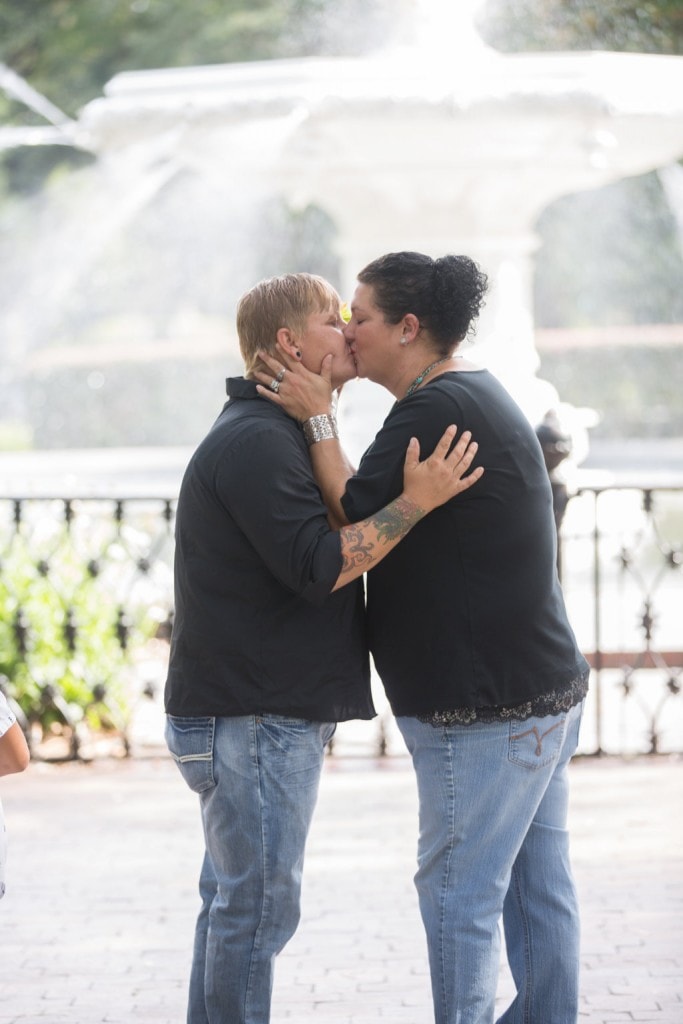 Cliff and Russell came to the park early with their best friends, a wagon of beer, and their dogs. One of their friends joked that the dogs were happy to finally be “legitimate.” If you can get through this gallery without buckets of water pouring from your eyes… you might need to have your tear ducts examined. 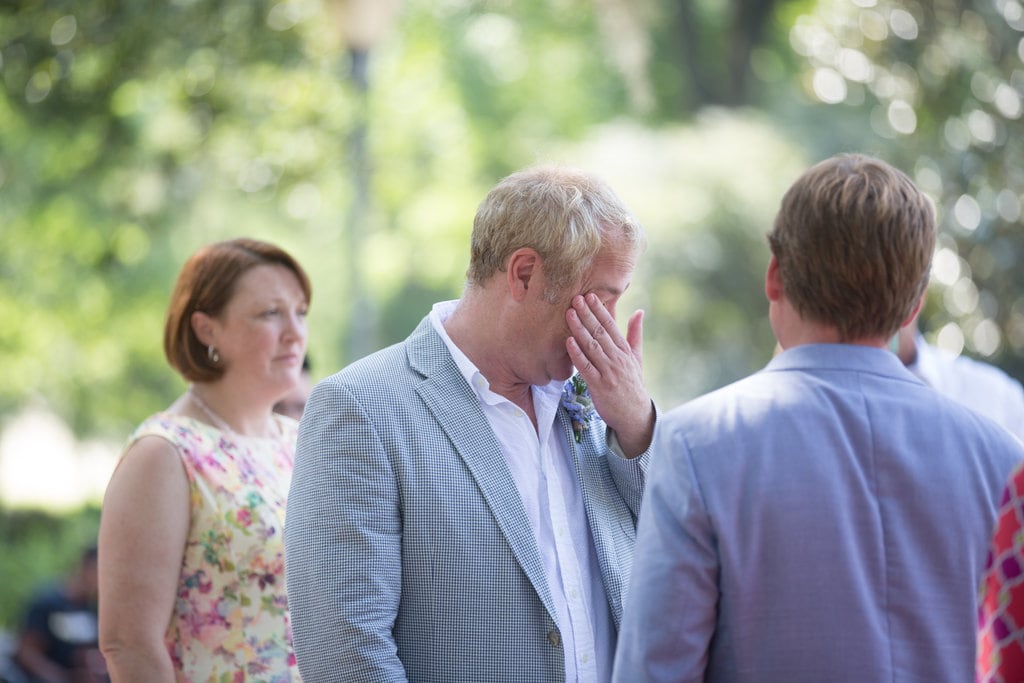 One of Cliff’s friends captured the end of my marriage pronouncement on video.

So there you have it. Love was celebrated, commitment was honored and the world did not collapse. In fact, I would say that Georgia was made a better place through the official creation of these 6 families. And of course, the work does not end. Over the week, I continued to marry same-sex couples who could not wait any longer through simple signing services, including Antonia and Cortney. Antonia is a soldier in the United States military and when she is serving our country and deployed overseas, she can now be assured her wife is taken care of under the law. Could we honor our hardworking troops with a better gift?

As for my work, I am not concerned about backlash. If there are couples who do not want to work with me in the future for my stand, so be it. I married 19 couples over the last seven days, more than triple the bookings of my busiest week thus far. I booked another ten future ceremonies this week as a result of the numerous inquiries I’ve received and while some are same-sex, most are for straight couples who admire what we did. Megan also spent the weekend updating her email capacity as it maxed out by the end of the week! Finally, I am also quite sure the State of Georgia will be looking forward to my increased quarterly tax payment on July 15th due to the unexpected boom. As I suspected, it turns out that standing by your morals instead of being afraid to offend anyone is actually good for business.

Thanks for sharing in our celebration by reading our blog post. All love is beautiful and so are you.

My Year in Review, Part 2: 2017 Had the BEST Savannah Weddings & Elopements!